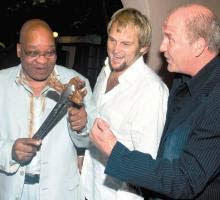 Now Jacob Zuma is reported to have had a braai with Steve Hofmeyer and Leon Schuster, amongst others (see left). Which makes one wonder, who is advising Mr Zuma? Steve Hofmeyer is, of course, South Africa's own Neil Diamond, but recently he has been transformed into an anti-crime, pro-Afrikaner activist. Is Mr Zuma meeting with him because President Thabo Mbeki said the white crime whingers are all racist? My response is: can it really be so important to be President that one would be willing to meet people who has inflicted their singing and movie making "talents" on the unsuspecting world?