So, is President Thabo Mbeki a South African version of Margaret Thatcher? That absurd idea came to mind when I spotted a new feature on my favourite internet news site. The Guardian is carrying a series on the great speeches of the 20th century and Thatcher’s 1980 Conservative Party conference speech is among them. (Others include Churchill, Rooseveld and Mandela.)

Mrs. Thatcher was much hated by the left for her often cold-hearted policies and actions, which she claimed would save from the mediocrity it had sunk into after the Second World War. She broke the power of the trade unions, rigidly enforced anti-inflation policies, which allowed unemployment to skyrocket, and generally acted with much contempt for the 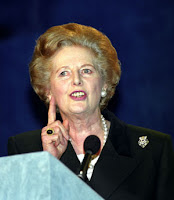 She was a true conservative revolutionary. I suspect that many on the political left, now hold a strange – only slightly ironic – respect for her. If only we could be so bold, we seem to think, we could also transform our country for what we think is the better. In the 1980 conference speech, she firmly established herself in the electorate’s mind as the “Iron Lady”, famously stating as follows:

If our people feel that they are part of a great nation and they are prepared to will the means to keep it great, a great nation we shall be, and shall remain. So, what can stop us from achieving this? What then stands in our way? The prospect of another winter of discontent? I suppose it might. But I prefer to believe that certain lessons have been learned from experience, that we are coming, slowly, painfully, to an autumn of understanding. And I hope that it will be followed by a winter of common sense. If it is not, we shall not be diverted from our course.

To those waiting with bated breath for that favourite media catchphrase, the "U" turn, I have only one thing to say. "You turn if you want to. The lady's not for turning."

Even though the ANC’s economic policies are far to the left of those espoused by Mrs. Thatcher, members of Cosatu might well agree that there is more than a passing resemblance between these two leaders. Like Thatcher, Mbeki managed to implement a radical change of course (from RDP to GEAR), upsetting many vested interest groups in the process. Like her, this was done despite the hardship it caused to many poor and disempowered people. And like Mrs. Thatcher, Mr Mbeki could only do so by firmly taking charge of the levers of power and ruling with an iron fist, thus creating many enemies in the process.

I am sure one can draw attention to many differences between these two leaders – Thatcher was far more charismatic and had more of the “common touch”, for example – but it is fun to think of these two leaders as somehow kindred spirits.

But then a mischievous thought arise: Will Mbeki’s reign also end in tears like that of Mrs Thatcher? Maybe we will know by December.

Well, Mbeki compared himself to Thatcher at the press conference launching GEAR didn't he?