On tolerance and the evils of religion

Am I demonstrating my religious intolerance when I say religion is a poisonous hoax imposed on us by charlatans of every stripe? If I say God is dead and the Pope is a dangerous, hate-filled little man in a funny hat, do I infringe on the rights of those people who love the Pope and pray every night for Jesus to forgive them their sins?

These questions emerged in response to my posts on Jerry Falwell and Christopher Hitchens and the latter’s critique of religion. I am asked: how can you advocate tolerance and then endorse the views of an intolerant, religion-hating man like Christopher Hitchens? 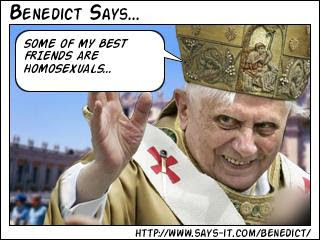 I think it is only possible to raise such questions because mainstream religion has enjoyed special protection in our public life. Religions – at least those religions supported by sizable chunks of the population – have always been treated in a special way and have been exempted from the kind of criticism reserved for other aspects of public life. Religious leaders can get away with far more than any other person in ever will. Sometimes that is good – think Tutu – and sometimes it is very bad indeed – think the Reverend Naidoo from His People Church and all the nutters at Doctors for Life.

So, if a Reverend or a Priest say that homosexuals are wicked and will burn in hell, that Reverend or Priest will not be spurned by the media, vilified in editorials, reported to the Human Rights Commission and taken to the equality court. No, we will smile and nod sagely and say that we respect the very Reverends’ beliefs but hold different views. When leaders of the Catholic Church say that women are too feeble to ever become Priests, we smile indulgently and fail to mention feminism and the similarities between the Pope, Jacob Zuma and misogyny.

Of course, the Constitution protects freedom of religion, which means that a person is free to believe that the moon is made of cheese and to tell the rest of us the good news loud and clear. We, however, must surely be free to ask that person whether he has considered a sojourn in a mental institution or a guest spot on Top Billing – or not?

Those who say we should tread carefully around religion, argue that religion is a deeply personal issue of defining significance for many people and that by ridiculing religious beliefs we are not respecting the human dignity of others. We should generally not make fun of the deeply held and sincere beliefs of another, the argument goes, because at best it would seem churlish and at worst vindictive and mean.

But religious beliefs – no matter how sincerely held – are often deeply offensive and dangerous to others. Such beliefs often perpetuate stereotypes and propagate hatred or at least disdain for those who are already marginalised and oppressed. When men of the cloth say, for example, that homosexual acts are sinful, they condemn a whole group of people to vilification and rejection and contribute to a culture of hate and violence against the group.

Perhaps if we really believe in respect for human dignity, we have a duty to speak out against those religious views and beliefs that perpetuate hatred and bamboozle people into suppressing their own personalities and needs. The obsession that many religions have with sex, for example, seem deeply disrespectful of the human dignity of others and also deeply oppressive.

UPDATE: The kind of religiously inspired behaviour that makes my blood boil.

Thanks the Stars for the Renaiscance

Pierre, read Sam Harris' "The End of Faith" for a substantive argument as to why moderate religion is a problem, not just fundamentalist expressions of said religions.

Telling the difference is, as you say, the trick.

If you mentally treat 'freedom of religion' as 'freedom of conscience' then one might get a better picture of what's actually at stake in the constitution.

People have a right to disagree and take part in that ritualised and stylised combat we call the political discourse. This is the development of ideas by trial and error, and one can't afford to defend indefensible barricades against ideological assault of a properly-regulated democracy. Active political discourse is definitely not covered by 'freedom of conscience'.

'Freedom of conscience' is the right to hold internal beliefs, no matter how strange, self-inflating or self-contradictory. To the extent that your conscience is your own business, or at most shared in a private group among consenting adults, I think this right has important, indeed fundamental, value. Freedom of conscience protects religion, and it also protects the scientific method. It protects faith, and it also protects the internalised and instinctive sense of justice and fairness that most of us, whatever our religion, share.

If people obtain decent psychological grounding from their religious beliefs, not only is this harmless to them, but it clearly very beneficial to society.

So I'm not prepared to defend any one religion; but I will defend the freedom of conscience unalterably, and with it, all religions.

I am not sure I agree with Harris. I agree that hideous prejudice sometimes masquerade as moderate religion (see Dutch Reformed Church's new document on homosexuality), and one should not tolerate that in the name of respect for religion. (Why do homosexuals still want to belong to such a church?) But sometimes religions can really be moderate and then I am not sure one could compare it the rabid rantings of fundamentalists.