When the National Assembly passes the Children’s Amendment Bill in the coming weeks, many parents will instantly become criminals. This is because the Bill outlaws all forms of corporal punishment against children – including corporal punishment by parents of their children.

Many South African parents use corporal punishment as a form of discipline, which means that many parents will now become liable for conviction on charges of assault. An aggrieved child would be able to lay a charge of assault with the Police who will then have to investigate the charges against the parent.

Of course an ordinary person who hits another person will usually be guilty of assault. However, until now the common law allowed parents to hit their children as long as this did not go beyond “reasonable chastisement”. The Bill now scraps that exc 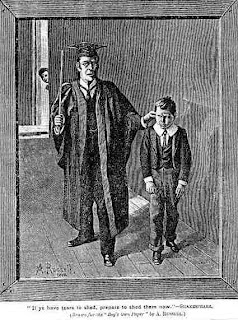 I personally believe that parents should not hit their children – and neither should they cut off part of their child’s penis as part of a bizarre religious ritual, for that matter. It is barbaric and cruel and can scar someone forever. (I also do not have any children that will drive me to extreme violence so it is easy for me to talk.)

Section 12 of the Constitution also states that ever person has the right not to be treated or punished in a cruel, inhuman or degrading way, and the right to security in and control over their body. The state therefore has a duty to try and stop parents from assaulting their children.

But I do not think the introduction of a complete ban on corporal punishment at this stage is a wise idea. One does not have to be a rocket scientist to know that this amendment is not going to stop parents from hitting their children. It is also obvious that the members of an overworked and under-qualified police force are not going to pursue cases of assault against parents unless that assault goes beyond “reasonable chastisement”.

This means that the legislature is passing a law that everyone knows cannot and will not be enforced. It is also a law that will not actually change the way parents treat their children. The legislature recognises this because section 139(5) of the Bill states that the Department of Social Development must take all reasonable steps to ensure that education and awareness-raising programmes concerning the effect of the ban are implemented throughout the Republic.

Of course we know and the legislature knows that “reasonable steps” are going to turn into no steps at all.

Why implement the ban then? All it will do is further to erode respect for the Rule of Law. Unfortunately as a society, we are still rather primitive and very far away from accepting that hitting children is a bad idea. When a law now criminalises corporal punishment by parents, those parents are going to start thinking that the law is an ass and need not be obeyed.

This is the typical reaction of a weak state. Because it feels the cannot really change the way people treat their children, they pass a law they know will not be obeyed and then they can feel better about the problem without having to do the real work needed for social change.

The end result is that the society stops believing in the law and it becomes socially perfectly acceptable to disobey the law - even when the law is a good one that needs to be obeyed.

I agree that unenforceable statutes like the Childrens Act runs the risk of inspiring contempt for the law. But some part of me draws a degree of comfort from the fact that the ANC keeps on plugging causes that are so obviously out of synch with the great bulk of its constituency. Like the ANC’s opposition to the death penalty, these radically counter-populist gestures would badly lose any referendum. They please only a narrow – but politically powerful – band of the liberal elite. (I use “liberal” here in the rather exotic non-pejorative sense.)

I think Pierre’s suggestion that statutes like this are a sign of a weak government is spot-on. I would go further, and suggest that they may also reflect a sad awareness the impossibility of a legislative fix to the issues that loom much larger – like poverty, unemployment and crime. It is as if the frustrated wish to do something about these probably insoluble crises is sublimated into a symbolic articulations of a practically impossible moral ideal.

I suspect that a large part of the government’s sometimes cretinous foreign policy can be explained in similar terms. There is a desperate need on the part of government to be project progressive ideals onto an international stage on which, in reality, South Africa is barely relevant. (Except in relation to African issues.) Hence the largely meaningless gestures of “solidarity” with the Palestinians as against Israel, and Cuba against the U.S. Ironically, the desperate need to project moral influence internationally leads to South Africa projecting sympathy for loathsome dictatorships like Myanmar and North Korea. Sometimes it appears that the government make nice with these countries just to be seen to be joining the great moral crusade against the U.S. (Yet, at the same time, Pretoria seems only too willing, behind the scenes, to occasionally co-operate with America in the “war on terror.”)

Michael, I agree that there is something comforting to be found in the fact that the ANC sometimes take unpopular positions. At its best, it leads to progressive developments like the adoption of the Civil Union Act. At its worst it leads to a complete disregard of other peoples wishes like with Khutsong. Strange our ANC.

Masgruva said...
This comment has been removed by the author.
7:52 am

Are you also against a cutting open a child’s abdomen -- to remove a ruptured appendix, or puncturing the tiny arm and bicep with a sharp instrument -- to inject dead polio viruses?

My point: caricaturist depictions can be somewhat misleading and disingenuous. For more on this see my blog of last week here

I agree that this piece of legislation is doomed to be an unenforceable 'paper tiger' - more or less like the anti-smoking legislation ... or even the apartheid era's 'ontugwetgewing'. What motivates governments to think out ths kind of nonsense, knowing that they do not have the full support of the populace? As you say Prof - you do not have any children - so you can't talk. I am from the old school - and believe in a moderate chastisement where needed, but am totally against mindless assault. Indeed some of those who don't believe in corporal punishment sometimes end up hitting their children (or others' if you are a teacher) - ... 'in self defence'.

Very good point about the uselessness of the law. I will not change my parenting style (and i am told that i am a good parent).
The important aspect here is i am now criminal, and at any point i can be subjected to due process. This is not what govt is for, this is abuse of power, and will not change actual child abuse in the least. Just like the new media law, it is not going to affect the real paedophiles.
Govt wants control, there is the real problem.